Springboks News Rassie’s management of resources was a master-stroke

Springboks News Rassie’s management of resources was a master-stroke

There will probably be many people after the Springboks’ 32-12 win over England that enabled South Africa to annex the Rugby World Cup for the third time who will be ready now to acknowledge coach Rassie Erasmus for being the genius that he is.

He was reluctant afterwards to blow his own trumpet, but he was ready to acknowledge the huge role in the victory that was played by the much talked about six/two split between forwards and backs that enabled his much fresher and less fatigued scrum to dominate the England eight in that crucial aspect of the game.

England did lose Kyle Sinckler early and that was a big loss to them, but full credit should still go to the magnificent Bok eight that scrummed England into the ground in the first half and laid the platform for their emphatic win.

There were no less than five scrum penalties against England before halftime and that enabled the Boks to take a vice-like grip on the game.

With the defence being as physical and as strong as it has been all tournament, and the lineout putting England under pressure in that phase, it all added up to an evening where England just struggled to breathe and were eventually suffocated by a Bok team that also brought many more additional innovative touches to their game than what they’d shown previously in the tournament.

But it was the scrum that led the way, that galvanised the South Africans and subdued England, and Erasmus reckons it was all down to management and that six/two split.

“I don’t want to sound clever but our scrumming dominance was a just a spin off from the way we played and approached our previous games,” he said.

“That six/two split, as I have said before, has allowed us to manage the players very well. The props we played have all played more or less the same number of minutes, unlike England. Guys like Sinckler have taken on a heavy load of 60 to 70 minutes every game, and maybe that came back at them.

“There was no fatigue element in the scrums for us, whereas maybe there was for them. Our guys have been used sparingly so they were very fresh and ready to give it a full go. It paid off for us tonight. Player management benefitted us in terms of fatigue. Dan Cole was given a hard time tonight but he is not a bad scrummager. Our guys are just fresh and that makes a big difference.”

‘RUGBY SHOULD CREATE HOPE, NOT PRESSURE’

There were many moments in the just 18 months he has been in charge of the Boks that Rassie Erasmus will list as important junctures in the build-up to South Africa’s third World Cup title, but the most recent defeat they suffered might have been their biggest learning.

“We had to be quite honest with each other after that defeat to the All Blacks, it was an important game for us as this was my first Rugby World Cup as a head coach,” said Erasmus.

Erasmus said that there had been massive pressure on the team going into the game because of the expectation back home and what was on the line in terms of what a win would do for the nation.

But he said as South Africans there had been a lot of practice for it, and that ultimately it wasn’t about pressure but opportunity.

“In South Africa pressure is not having a job, having a close relative murdered. We’ve spoken about this. Rugby should not create pressure but great hope. And you are privileged if you are in a position to be able to give people hope. Hope is when you play well and everyone is braaiing on the Sunday and feeling really good after the game no matter your political or religious differences.

“It is not so much a responsibility but a privilege to be able to try and do that for people,” he added.

Erasmus said that another key to the Bok triumph at this World Cup was the decision that had been made to get the squad together for 20 weeks, which many people felt might be too long.

“We decided long before the Rugby Championship that because we were still quite new as a group and the coaches were new we would need 20 weeks together in order to be competitive at this World Cup. That’s why we chose to come here early to play Japan in the warm-up game. It was not a sacrifice, just a massive honour. We are in week 19 now, next week will be week 20 when we do our trophy tour back home in South Africa.

“I am very proud of the guys. We put everything on the line in our quest to win the World Cup. We did have some luck along the way. But you need that. I am just so proud. We needed this as South Africans, we needed this for the country, we never doubted we could do it if we put in the right planning and preparation.”

A moving message from Rassie Erasmus.#StrongerTogether 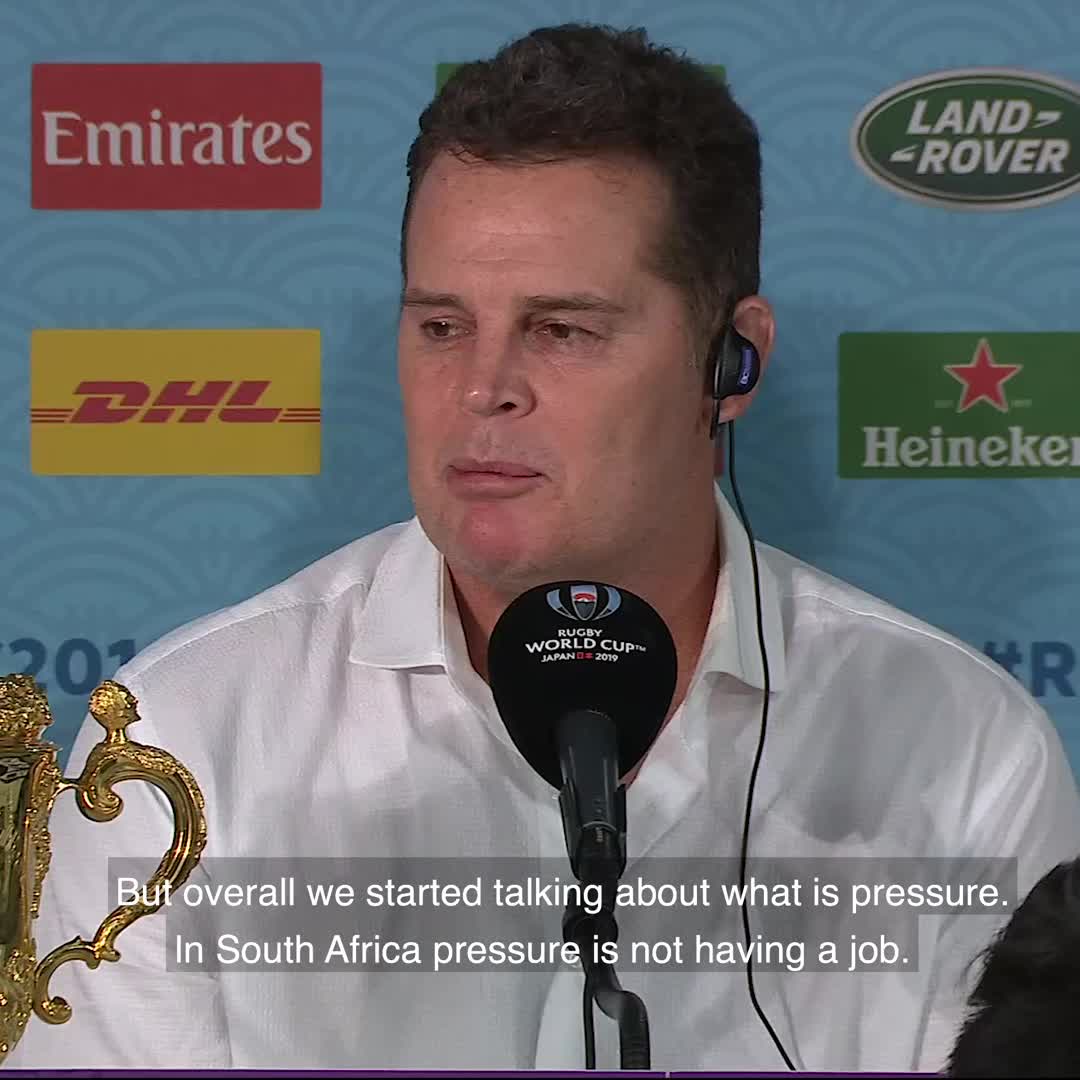